Babesiosis is a diseased parasite in dogs that can occur by different types of ill transmissions.

How is Babesia Caused

Babesiosis is a diseased parasite in dogs that can occur by different transmissions: dog bite transmission, blood transfusions or trans-placental transmission. However, the most common transmission is by tick bite, as the parasite uses the tick as a reservoir to reach active-blooded, or, warm mammals. 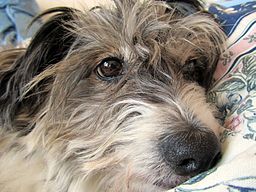 Symptoms of this type of dog tick virus include:

Symptoms may not be shown in domestic animals until two weeks after the tick transmission of the virus; but once it does, the virus can lead to jaundice and anemia causing the dog's body to not produce new red blood cells that were  destroyed from the virus.

Types of Dogs At Risk

Dogs that spend time outdoors have an increased risk of being bitten by an infected tick carrying the parasite. This is especially true in the summer months (May through September) when dogs are most likely to be playing outside in the backyard, at a dog park, or hiking with their partners through a wooded area.

Removal of the Virus

If pet owners find a dog tick attached, they will need to remove the dog tick safely with a tick removal tool. Then, contain the tick and take it quickly to a vet's office for identification. Additionally, dogs will need to be evaluated for tick-borne illnesses. A vet may use a blood sample from the dog for examination.

Once the virus is identified as Babesia, a vet can prescribe antibiotics to fight the disease and halt the spread of mutated species of the disease.

A short sentence describing what someone will receive by subscribing